Most people finds joy getting married to that dream spouse. You see the happiness in their faces on that day, yet some starts regretting few weeks or months into the marriage. This might not be all that can lead to regrets in marriage, but it could help you know some things to do and some questions to ask before saying I do.
Today on let’s talk, you will be learning few of them through Rose’s story. 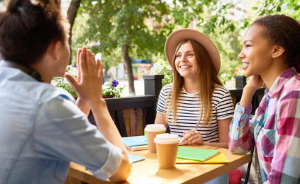 It was in 2015 when my best friend got married and I happened to be her chief bride’s maid. I couldn’t really help properly in the preparation because I was serving (NYSC) in a state far from where the wedding was to take place.

Few days to the wedding I came back since I was her chief bride’s maid. Even if I didn’t help in the preparation at least I could help her with little things while I am here now , I said.

The traditional wedding was done and also the white wedding in church. While I was her chief bride’s maid, her husband’s best friend was also his best man.
It was during the wedding I met Daniel ( the best man). I didn’t really pay attention to him at first until he called my attention and we exchanged pleasantries,  after then, he kept communicating with me and before I knew it, he was already asking me out, I asked if he was not in a relationship but he said no. He stated that he had a girlfriend which have parted ways with him couple of times. The truth is, I just took him as a friend because I don’t want to be the one that would break a relationship. He further explained that he is tired of his girlfriend as they always quarrel and make him loose his peace, till he said he had finally broke up with her. I confirmed from my friend of which she told me the state of Daniel’s relationship ,stating it was just too bad.

Few months after parting ways with her, Daniel came back to me , he said I am what he wants, I was a bit scared cus I really don’t know the exact thing that happened since I am hearing just his part of the story. After I was sure he had really parted ways with her, I decided to give him a try and on  6th  FEB 2016 he proposed (online) lol. That was few months to my passing out of service.

It was coming faster than I expected, he proposed we would get married NOV 26th 2016. When I finally passed out in April 2016, I decided to  bring him home to see my parents, then in June 2016 , he came to see my parents to make his intentions known.

After the visit, we started planning towards our wedding but fortunately, there was no money to carry on with the wedding plans.  I was yet to secure a job so things were a bit difficult.
He called me one day and said he wants to do the introduction proper first but I asked him a question which threw him off balance. “After the introduction, when will the wedding be? I asked , the reply he gave wasn’t ok with me. I made it clear that I don’t want to do an introduction then wait for months or years before the marriage, it’s better we put everything on hold for now which he agreed.

We continued in the relationship happy together even when there was no money, the fact that he loves me and I love him as well was my joy.

Along the line I started seeing some red signals which I would have been a fool to ignore. I have always known Daniel to be very quiet, very responsible and also a pastor but I also knew there is always this dark part of everyone , but I was yet to know Daniel’s ugly part.

There was a night I called him on phone and his voice was sounding dull and sad,  and I also know how we communicate especially when talking on phone. So I asked what the problem was with my sweet , cool, polite and loving voice, but the reaction I got from him was shocking. I couldn’t believe Daniel would talk to me like that when I do something wrong, not to talk of when I did absolutely nothing wrong. I was shocked to my marrows as tears rolled down my eyes immediately, I just told him ok and goodnight, then I ended the call, I was too pained by his actions. The next morning, he called to apologise but deep down he had created an everlasting impression that I won’t forget in a hurry.