Let’s hear what Mabel has to say about about her scary moment. 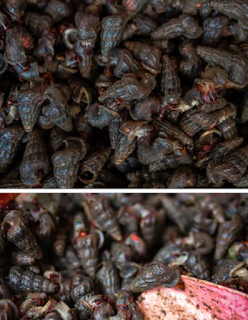 One morning, I woke up very early with the intention of searching  for sea snails(periwinkle snail) scientifically called Littorina Littorea with my friends as agreed the previous day.  We left home very early because it is believed that if we dont go out on time, others will pick all before we get there. It was in the month of November and on that month  it is believed that evil things happens.

Before we set out, we were told to be careful, we have often heard stories of evil things that happened around the axis we were going to (we just felt it was a myth).
When we got there, we saw a very big snake. The minute we saw the snake, we immediately decided to leave that particular location to another.

When we finally came together, we decided to give ourselves new names that minute, the names are quite funny though. Some answered pepper, onions, maggi, salt, tomatoes etc.
After we finished giving ourselves the new names, we decided to spread out again.
We spread out in pairs, some were in two’s, some in three’s and so on. When we picked to an extent, we would call ourselves who are in pairs by the new names we gave ourselves and ask how far they have gone in picking but to our greatest surprise, we started hearing our names again, this time not called by any of us. We kept hearing it harder (Maggi, salt, pepper… Come) we heard it repeatedly for a while, the more we hear the names, the more the sound becomes closer to us, it was as if the people calling us were approaching us real fast.
Because of the closeness of the sound, we decided to hide in the bush, we cut leaves and put in our mouth, we were literally talking to the bush (bush please, be nice to us, don’t allow whatever is calling our names see us).

In the blink of an eye, we saw some strange creatures passed us with full speed like a flash, the creatures were scary (very very short), fear gripped us the more as we never believed that such creatures even exist.
I was imagining things in my head, so this is how I will die, oh God! save me.

When they passed, they didn’t see us but they felt the presence of people (us) inside the bush.

We were still hiding with fear in our hearts when we heard these creatures singing with the name of the first location we left because of the stories we heard about them. These creatures were singing with this force and strength I can’t explain, they were actually happy because they felt they have seen food that they will eat. They knew we were there but what they didn’t know was the exact spot we were.

When we saw hiding won’t do us any good as these things won’t go away, we all decided to come out from our hiding place and straight, we all plunged into the river and swam away leaving our boats behind.

As we were in the river swimming, we saw a fisher man who came to fish, it was his boat that carried us to the place we left our boats because we felt that an elderly man was with us, we became a bit bold.

It was after that, this old man started telling us stories of event that had happened there and counted us as very lucky to have come back alive.

HOW I HANDLED IT
It was simple, we tried to survived and never give up. We hid in the bush after which we jumped into the river.

MY ADVISE
Not every scary story is  myth, sometimes we should listen and take precautions. Don’t doubt everything, else you become a victim.

Now let’s talk,
1) Do you believed that creatures as described in this story exist?
2) What if you were in such situation, what will will you do?