You see what will be discussed today?  It is one big mistake that almost everyone makes in relationships. Most times,  they refuse leaving a toxic relationship because of it. They hold on to things they are not supposed to hold on to. You will find it out from this story told by Faith. It’s a long story but you may want to read to the end to fully understand it as it will help you in relationships especially with toxic people. This story is broken into parts so you can easily digest it and get what you should learn from it. I hope it helps how you cope with such relationships. 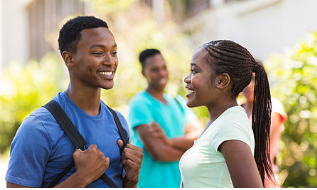 It was on a public holiday to celebrate the Sallah. I was in my 200 level in the university and I was invited by my coursemate/friend Mike to go and eat sallah meat in the house of another coursemate Hakeem who I was also friends with. On our way to Hakeem’s house, Mike said we would have to call Tony and Joseph who are also our coursemates to go with us.

Tony and Joseph weren’t actually my friends, in short we had been in the same class for about two years and we dont speak to each other apart from the usual collection/submission of assignments since I was the assistant course rep of my class. So when Mike mentioned we would stop by their place, I was a bit taken aback but I just decided to follow him.

When we got to Tony and Joseph’s house, we sat for a while and waited for them to get dressed. As Tony was dressing up, the flirt in me spoke out,  I swear I wasn’t the one talking, it was the flirtatious me 😀 “Tony, please wear that shirt that I love o, the one that suits you so much”. The stupid guy was already smiling because a girl had subtly told him she admired a particular dress of his. But in my mind,  I knew I didnt even know any of his clothes.

He smiled sheepishly and was like “which one?” and started picking out his clothes one after the other so I could tell him “yes it’s this one”.. Well, his wish came true as he brought out one shirt that actually looked fine and I exclaimed ” yes! this one! He smiled again and said it was dirty but he would wear it another day. Okuuuurrr!! We got ready and went to Hakeem’s place.

While we were at Hakeem’s place,  Mike was just over me like we had something,  I even played along and was acting like we were lovers but deep down I was wondering why Mike was actually acting that way. Meanwhile, I and Mike also just became friends, we had also been in the same class for a year and never spoke until that semester.

Anyways, we had fun that day and it was time to part ways, everybody went to their respective hostels and lodges. School resumed about two days later and while we were in the lecture hall waiting for the lecturer to come, I and Mike sat together as we usually sat since we became friends but this time, Tony sat in front of us and he was actually wearing that shirt I told him I liked.

I quickly scribbled a note to him that read “you look so good wearing this shirt I love. Love you” and he replied “thanks and I love you too” I swear, I didn’t mean a word of what I said, I was only being flirty.

I dont remember how we exchanged numbers but I know I sent him a message one day saying “I am trying to read but cant read. Maybe because I am ……..” That was all I sent, I left the guy to fill in the blanks and I believe he concluded that I meant “Maybe because I am in love with you” He replied but I cant remember what his reply was.
To be truthful, I wasn’t a teeny weeny bit attracted to this guy, I was just innocently playing with him and possibly trying to get a reaction from him. And a reaction is actually what I got, because the guy took the whole thing so seriously, and he began to look at me with “love eyes” if you dont know what “love eyes” means, go and check google.