Skip to content
Today on let’s talk, Mercy will be sharing her encounter with her friends while in school. 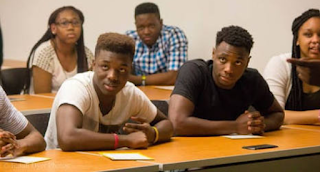 We were in 100 level in the university when we first met (Aisha). She came with the second batch while I had resumed with the first batch. When she resumed, she was always with TJ.

TJ happened to be my first closest male friend on campus.In short, let me just say we had a crush on each other. I didn’t love him enough to date him besides I had a boyfriend at home but I had feelings for him. TJ on the other hand wanted to date me at all cost, he said it was either we dated or he would stop talking to me, because the feelings he had for me was more than friendship. I chose the latter and that was how we stopped talking.

when Aisha resumed , she was all over TJ, it was a bit awkward for me to adjust to because few weeks back, TJ and I were all over each other. Not that I was jealous, I just felt a bit queasy.

Not only was Aisha all over TJ, she also became good friends with my closest female friend Tovia since they were in the same hostel. Tovia and her has been friends since our secondary school and attending the same university kind of rekindled our friendship but we were in different hostels.

Somehow, I got into talking terms with Aisha because of Tovia but we were not so close. Just normal talk whenever we meet or the need arises. As the semester progressed, I thought she had a fight or squabble with TJ because they actually stopped talking. Anyways that is their issue, not mine.

Fast forward to the end of 100 level, I wanted to move off campus in the next semester because I really hated the school hostel. I and my friend Jennifer had planned to rent an apartment together only for her to tell me that her boyfriend said she should not stay off campus. Asides that, she had been avoiding me ever since she started dating the guy, so obviously, the guy told her I was bad influence to her that is why she didn’t want to move in with me. With all the badmouthing, their relationship still ended. Nonsense.

Anyways, I had already told my dad to only give me half of the rent, since I would be sharing the rent with a friend. I didn’t know how to tell my dad that he should now bring full rent. The whole situation was just giving me a tough time.

On that fateful day, I entered the school compound and saw Aisha, she said she heard Jennifer won’t be staying with me anymore, I said yes o. She  said she was interested in being my roommate. She told me she saw a house that was very nice, secured and all that, she insisted we should go for that house. Truth is, I had been shuffling off campus and school hostel since 100 level. Inshort, all through my second semester, I was living off campus with my elder sister.My elder sister was graduating and I just wanted to take over the place. So when Aisha came with her proposal, I didn’t  buy it wholeheartedly because I was not ready to move from my apartment.

But I just decided to check out the place with her, long story cut short, it was a disaster and we ended up at my apartment as roommates. Aisha and I clicked, we became very close, went everywhere together, gisted, played etc.

One evening, Frank came to our place.
Frank was Aisha’s coursemate and she was always mocking him. Telling me about how ugly he is and all that. Apparently, she knew him from home. Frank and I weren’t exactly friends but I was quite popular then in my faculty so he knew me, I knew him and we sometimes say a few hellos.

That day he came to our place, I was a bit surprised. But for sure, he came to see Aisha. We all gisted and it was getting dark. ok,  Frank it’s late please start going, Frank said NO,  Aisha wasn’t  even making efforts to chase him away. I just told them no one would deprive me of sleeping on my bed that night, so I jumped on the bed and made to sleep.

Aisha and I shared a bed, so Frank was supposed to sleep on the rug right? Frank didn’t  sleep on the rug, he ended up sleeping on the same bed with us. Aisha in the middle, I and Frank at both ends.

As we were sleeping, Frank stretched his hands and was trying to carress me.I quickly pushed his hands away yet he kept trying and I kept pushing. In my mind I was like “why would Aisha allow this lunatic to sleep  here”? . I  managed till morning.

Aisha and Frank left very early in the morning because they had morning lectures. About one hour after they left, Frank came back.

Click to continue…
I never changed to what they expected, I proved them wrong -2